The Pinnacles Trek is famous for the view of the Karst Pinnacles and it doesn’t disappoint. We booked the Pinnacles trek through the Park office, which meant that we had to bring our own food, but it was much cheaper than the fully guided treks.

To get to the start of the climb we took a 45 minute long boat ride up the Melinau River. The boat stops at a Longhouse market, Clearwater and Wind Caves, so no need to visit these caves on a separate tour. If you don’t want to see the caves, you have to wait for the rest of the boat to tour them anyway. Lunch is self-provided but many hotels will sell you a bag lunch, if booked a day in advance.

After lunch there’s another 15 minute longboat ride to the star of the trek. When the water level is low, you often have to get out of the boat to push it through the rapids and rocks. We were lucky as we didn’t have to push since we had heavy rains overnight.

The first day is just an 8 km flat trek along the river to Camp 5. During our trek, we experienced a typical Borneo downpour, which is common. Things started out easy, but then, the rains began. It poured for about an hour and it was so intense that we were soaked after the first 2 minutes.  The bigger problem was that the rain brought out leeches. By the time we arrived at camp Richard had pulled off 8 blood filled leeches and Maggie had 6! Not a great start to this adventure. We arrived at camp after 2 ½ hours. The camp is quite basic with 6 or7 rooms with 2 rows of beds on either side.  Each room can sleep about 12 people. There is a kitchen with hot water, pots and pans to cook with as well mugs, plates and cutlery. If you go on your own, you’re likely to salivate as the guided trips eat massive meals at the adjoining tables. But then, you just have to remember how much more they paid.

We arose at 6 am the next morning and by 6:30 we started the trek. From Camp 5, the trek is only 2.4 km, but is a 1600 m elevation scramble to the top. We climb and hike a lot in the Canadian Rockies, so didn’t think it would be too difficult, but we don’t climb at the hot equator or in a humid rain forest. The trail was very steep; approx. a 45⁰ – 60⁰ incline, and was over slippery, mossy roots and sharp limestone. Part way up, the steep sections have ropes, which are a blessing on the way down. Three quarters of the way up, the ropes are replaced by ladders. It’s a long, steep climb to the top, but if you go slowly, it’s not too bad. As the trail approaches the summit, there are several carnivorous pitcher plants. Ask your guide to help spot them as they are sometimes difficult to see.

Finally, almost 3 hours later, we reached the incredible viewpoint to see dramatic, razor sharp, karst limestone pinnacles. They were formed by hundreds of years of rain water wearing down the limestone rock into these beautiful formations.

Getting to the summit was only half of the battle as we now had to retrace our steps down that steep, slippery trail.  The ladders and ropes help to descend the steep areas, but you have to watch every slippery step. After another 2 1/2 hours we were back at Camp 5 and welcomed a refreshing dip in the Melinau River. As we relaxed at camp we were joined by dozens of beautiful butterflies, including the endemic Rajah Brooke’s Birdwing. 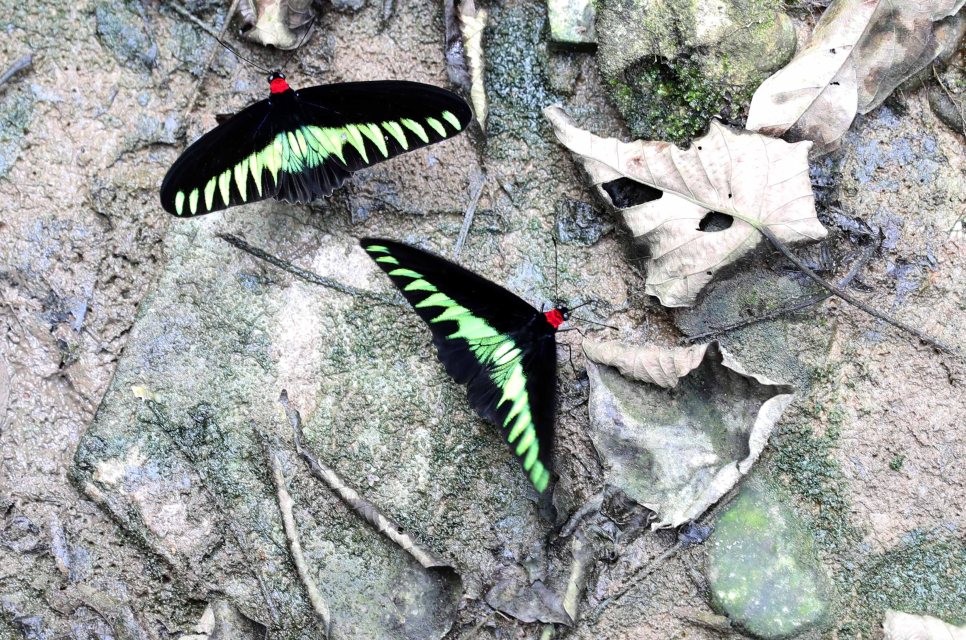 The next day we hiked the 8 km back to the boat dock. It rained overnight but not during our hike and yet Maggie had another 4 leeches and Richard had another 6! The longboat then takes you directly to Mulu National Park in about 20 minutes.