Vientiane – Having just come to Laos from Myanmar, we were pleasantly surprised to find its capital, Vientiane, relatively clean and organized. It’s a nice city with clean, paved sidewalks; well-kept shops and houses; and tree-lined streets. Laos was a French colony up until the mid 20th century, and there are still glimpses of the French influence today: government buildings are signed in Laos & French; cafés sell French baguettes and frog legs; and of course there’s the Patuxay Monument, the L’Arc de Triomphe look-alike.

Laos is a Buddhist country so there are also several wats. The most important in Laos is Pha That Luang. It’s pictured on Loatian money.

Kong Lor Cave – The small village of Kong Lor is in the mountains, 300 km south of Vientiane. The bus ride takes 6 ½ hours, but the last 40 km takes 1 ½ hrs on a very rough, pot-holed road. The main bus can’t travel on this road so we had to ride in songthaew. These are the same as in Thailand where the back of a pick-up truck is rigged with bench seating and a metal roof has been added.

We thought we had seen enough caves but had heard so much about Kong Lor that we had to see for ourselves, and we’re really glad we did. It may be the most impressive cave yet. Kong Lor cave is a 7 km long cave with a massive river passage running its length. The Hin Buon River enters under the karst mountain range, twisting and turning in its 7 km path.

We hired a boatman with a wooden, motor-powered sampan to take us on the river through the cave. Equipped with only a flashlight, he drove us though darkness following the twists and turns of the river cave avoiding stalagmites projecting from the river floor, rapids and sharp rocks jutting out from the sides. We went through narrow channels and hairpin turns, trusting that he knew the way. Midway through, we could see lights. Our boat pulled over and we were able to walk through one of the chambers. The Park has done a really nice job of setting up a walkway and lighting that beautifully illuminates this chamber. The blue and red lights show off the interesting features on the stalactites, stalagmites and cave walls. 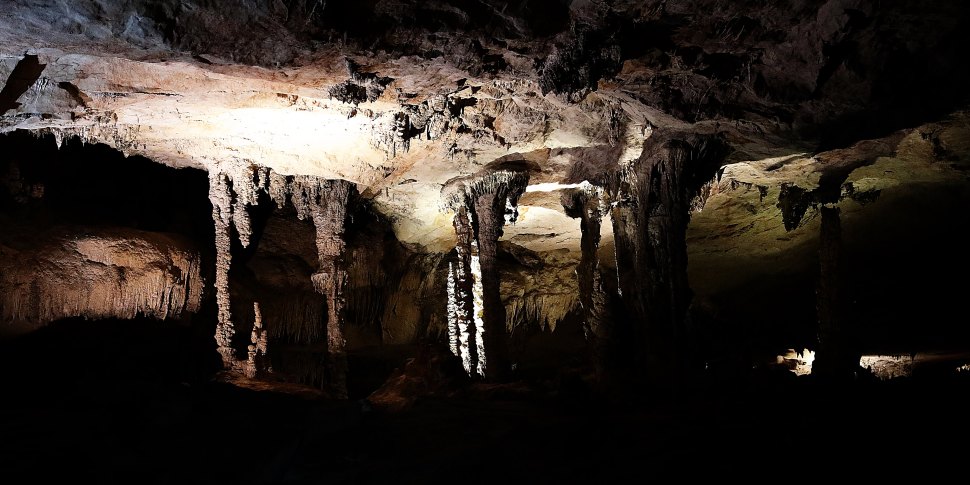 After walking for about 10 minutes, the path brought us back to the river where our boat was waiting. Soon we were back in darkness, zooming through the underground. After another 30 minutes, we emerged at the other end of the cave in a tight river with an over-grown jungle and steep mountain cliffs. After looking around at the scenery we were back in the cave, speeding back through 7 km of darkness. It was quite remarkable how the boatman knew every turn, rapid and obstacle of the dark cave so well.

Thakhek – South of Kong Lor is the state capital city of Thakhek. Situated along the Mekong River, Thakhek still retains some of its French influence. There is tree-lined riverwalk, French colonial homes and a central plaza. It is a cute city. In this area, the Mekong serves as the border between Laos and Thailand. We saw two beautiful sunsets across the Mekong with the lit-up Thai town of Nakhon Phanom on the other side of the river.

Green Climbers Home – We had intended to stay at the Green Climbers Home but didn’t realize they book up very far in advance. So instead, we rented bicycles and rode the 15 km from Thakhek. The bikes however, were single gear cruiser bikes, so it was a bit more difficult than we had expected. The camp is located in a small valley, surrounded by impressive, large, blackened limestone cliffs covered in vegetation.

The rock is very strong with many features such as pockets, jugs and holes that are great for climbing holds. Trees also take full advantage of these rock features with their roots running in and out of the holes in the rock on their way to the ground. Some cliffs start out as overhangs. We watched in awe as a really good climber flashed a route far beyond what we’d ever dream of trying. It’s a really beautiful area with great climbing.