In the northwest corner of Laos is the beautiful, Nam Ha National Park. The park has jungle-covered mountains and deep river valleys. We went on a 2-day trekking, kayaking and jungle camping adventure in the park.

The park is 40 minutes away from the nearby town of Luang Nam Tha. We spent a day in Luang Nam Tha before the trek where we found an interesting bamboo bridge and Richard had fun teasing a goat. There were also a few of the homemade, tractor-like vehicles common in Laos. 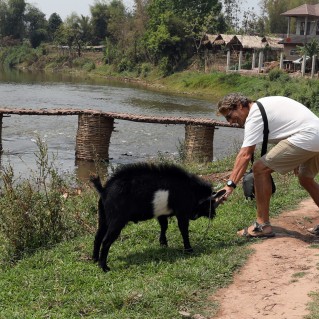 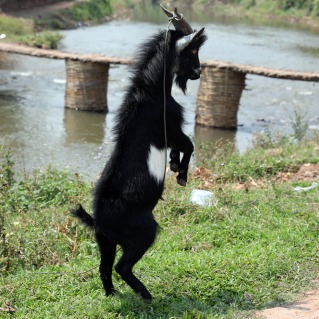 The goat is getting angry

On our drive from Luang Nam Tha to the park we stopped at the local market to get food for the next two days. Seeing the meat section made us both glad we’re eating vegetarian. The rice section had so many different kinds of rice, we can see why it’s served at every meal in Laos.

Different kinds of rice for sale at the Nam Tha market

Goat head for sale at the Nam Tha market 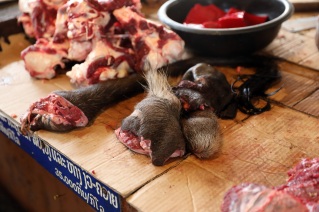 Meat (?) for sale at the Nam Tha market

Buffalo legs for sale at the Nam Tha market 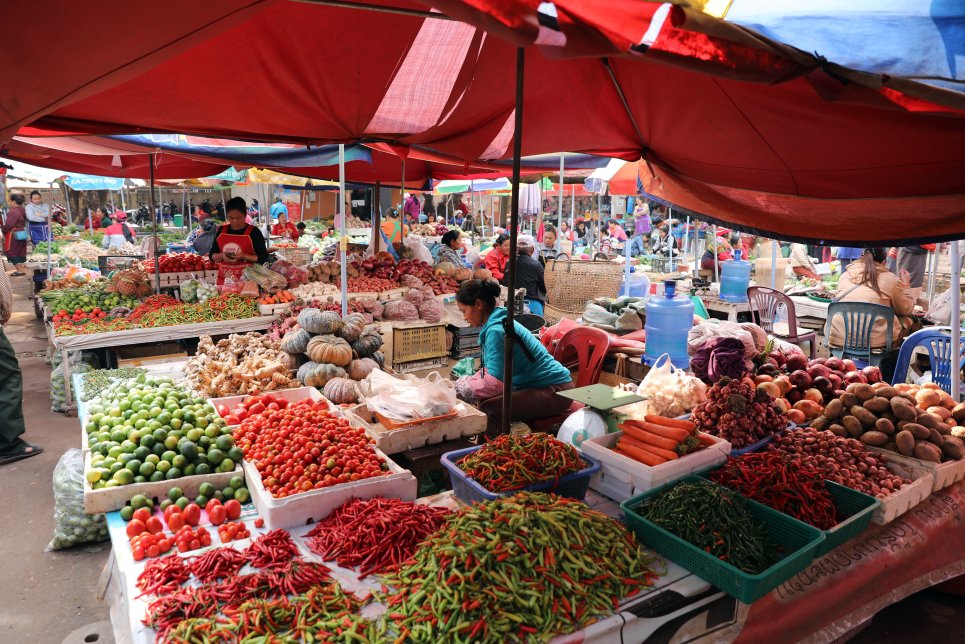 The trek started with an immediate steep climb and then continued up and down a steep undulating path through the jungle. There wasn’t a lot of scenery as the jungle is incredibly dense, so instead we looked at what’s inside the jungle. Our guide stopped frequently pointing out different foods and medicines that the various roots, leaves and flowers provide. We tasted several of them as he explained their uses. They ranged from the tasty stalk of the cardamom plant, to the bitter and spicy galangal stalk, to a very bitter tomato-like fruit. He showed us the different parts of bamboo and all the uses for it, including eating the shoots.

We stopped for a long lunch break and watched as they prepared our meal from food bought at the Luang Nam Tha market and all the plants collected during the hike. The preparation began by making a fire and building various stands for grilling lunch. Our food was presented to us on banana tree leaves that the guides had just cut from nearby wild banana trees.

After lunch we walked a little further and got to our campsite next to the Nam Ha River. We wondered why we arrived so early, but then realized how much work still had to be done. A shelter needed to be built which involved clearing bush, and using machetes to cut down several bamboo trees and dozens of banana tree leaves. Together we built a shelter for sleeping. The frame and roof were built using bamboo poles tied in place with string made from tree bark. The roof was covered with many rows of large banana tree leaves. Once the roof was complete, the ground was also covered in banana tree leaves. The shelter was supposed to be waterproof, but we hoped it wouldn’t be tested. Fortunately, it didn’t rain!

While we were finishing the shelter, the guides began dinner. They built a fire, a bamboo stand for the rice cooker, bamboo soup pots, and a bamboo grill. We ate our meal sitting on the ground with a few banana leaves spread out on the ground to serve as a table. Sticky rice was passed to us by hand and the soup was served in long bamboo bowls made by the guides. The only utensils were spoons for our soup, and the rest of the meal was eaten with our hands. After dinner we shared a bottle of laou lao (moonshine) which we drank from a small bamboo shot cup.

After that it was an early night, but not a restful one. The sounds of the jungle, as well as the hard ground, kept most of us awake. We didn’t realize until morning that we should have smashed the thick, pronounced spines of the banana leaves so they wouldn’t poke our backs. In the morning we were treated to another massive meal, consisting of scrambled eggs (cooked in the sticky rice pot only because there were 48 eggs to cook!), fish and a frog that was caught in the guides’ net overnight, and of course sticky rice. We were also treated to coffee served in bamboo cups that the guides made.

After breakfast we trekked to a Khmu tribe mountain village. The Khmu people are originally from Cambodia and are farmers living completely off the land. They even built their own rustic dam to create hydro power for the village.  Power is only available during dry season as the river is too high during rainy season.

From this village we started kayaking. The river was very low, and as a result there were many times when we had to push our kayaks over river rocks and through the rapids.

After an hour of kayaking, we stopped at a Lanten tribe village. They are originally from Tibet but believe in animism not Buddhism. One of their beliefs is that windows let in evil spirits, so they live in small, rustic bamboo homes with no windows.  From here the river became deeper so we were able to kayak without hitting as many rocks. The Nam Ha (River) is a very beautiful river with thick jungle coming right to its edges. During the 15 km kayak we had to pass through many rapids, some were very easy because the water was low, others were much more technical, and we really had to pay attention so that we wouldn’t tip. It was a lot of fun, and very tiring.

After 6 ½ hours of trekking and kayaking on day 2 we finally came to the meeting of the Nam Ha and Nam Tha Rivers and the end of our journey. We were so glad we had the opportunity to do this trek as we experienced another side to jungle living.